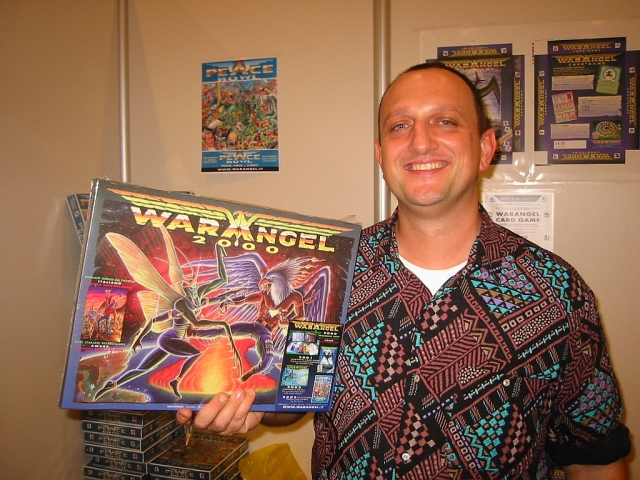 Angelo Porazzi has worked on the following games in our publishing house:

Author, artist of the entire game

Artist of the cover

Artist of the cover

Below excerpts from an interview:

I was trained as: father of three beautiful daughters, if you also count the mother this makes the four women around me: this is a great training ? I am also a trainer for American football and ultimate frisbee, two sports I play and teach as trainer.

My career path was as follows: I started as a graphic designer, illustrator, photographer and cartoonist. The first year I worked as a freelancer, mostly in the advertising industry. 1996 Warangel was distributed nationally. In the same year I started my career as a creative mind and illustrator in the game world. In 2000 I self-produced Warangel, which has won prizes for best Italian game at four different conventions. Last year I was more and more involved in the organization of game fairs, because I am the initiator and coordinator for Autoproduzione (Self Produced Games), which has set itself the goal of bringing new authors and designers together who want to create and produce their own games.

My hobbies are: Develop and illustrate games with my daughter, friends and other authors. Playing and coaching of American Football and Ultimate Frisbee. Create communication and links between people.

If I were on a desert island I would take the following: Much food ;-). Something to play (a Frisbee, a football. A lot of friends to play with ?

My role model / he is / are … Every good master of his craft, in all situations of life

My favorite game of my own creation is … Warangel

Because … it is still being bought after 12 years and I enjoy it, I get suggestions of thousands of players worldwide. Players have fun suggesting new races, new materials. A wonderful idea “by players for players”

If find important in games … that they facilitate contact between people. If a game compels its players to consider their moves in silence without connections and interactions to the other players, it is not appealing to me. It is then no longer a game but an exercise to show “that one is better than the others”. If a game causes emotions, interactions, connections and fun … it is a game which I like.

I came to be a game designer …
by showing my first prototype of Warangel to someone. The first publisher told me “It is good as is it.” The game was so appreciated by players that I received over 800 handwritten letters, which called for extensions. It has given me a lot of fun to participate in all production processes: development, game testing, illustrations, print files, printing, packaging and ultimately presenting and playing the game at many conventions.

If I want to come up with a new game idea then … I don’t look for it. Ideas are “inspirations” that you get. If you are open-minded “ready to receive the light” then the light will find you ? !

The development time of my games … takes years. Love Pigs came to market in 2007 and was tested approximately for 10 years with families, married couples, lovers, colleagues, team friends, etc.. I listen closely to every opinion and have no hurry to finish another gamed. I publish them one at a time, when I feel that the time has come for this type of game. I created my own version of Love Pigs, a publisher liked the idea and published it.

My game audience is … families. Friends to enjoy games with each other and who want to have fun. Fathers who like to play a light wargame with their 10 year old children. Ordinary people thus.

I’m especially proud of… Game Pizza? ?
In Essen 2005 Jost Shwider often came to my stand in Essen to create the Italian-German website with me, that present Italian authors in Germany. I created the Games Pizza logo and the website known in Italy.

My greatest game success is… I have achieved many successes thanks to my work in the gaming world. Best of all is that I am always invited to new first editions at gaming conventions. This shows that my work I have made “on the battlefield” in recent years, is recognized by both old and new games organizations.

My next goals and plans are … to follow this way further along, even better if possible. One step after the next and always the best for the people around me.

My motto is … Do your best, one step after the other, also for other people around you. Live relaxed and enjoy the real life, which is in fact a great game!

My name is: Angelo Porazzi
I live in: Milano