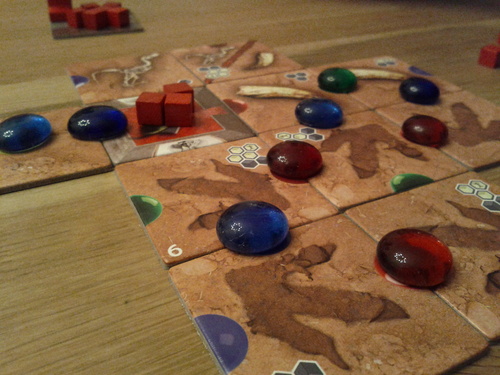 The following is a few explanations on the mechanics of Exposaurus:

The winner of the second contest at www.spielmaterial.de is mainly intended for the casual player. The rules are not complex, but leave room for tactical decisions in the course of the game.

At the beginning of the game – depending on the tiles laid out – players can choose which of the six different fossil species they want to specialize in. It is unclear for them, however, first whether this choice was appropriate, or whether they have to re-orient themselves in the course of the game.

While at the beginning the players as museum directors have many freedoms when fitting the artifacts into their museum, these freedoms are clearly narrowed down in the course of the game and lead to problems to achieve the best possible result. The question of whether the right fossils can be found and also financed, leads to an increase in tension in the course of the game, which is resolved with one of the game end conditions.

The playing time is about 45-60 minutes.

Exposaurus, like many other games, lives from the fact that every other player builds something up for himself, in this case his museum. Thus, each player has a experience of success, even if he should not win.
The incentive is certainly that the players aim for an optimal distribution of the artifacts in their limited museum.

The essential element of the game is the overlapping puzzle mechanics: the players need the same dinosaur fossils, but they have to match the gems to match the “right” tiles and keep out an eye if they can finance the “correct” tiles.

The random aspect is certainly in the drawing of the fossil cards at the beginning of a turn. However, more and more tiles are available in the course of the game, so that more options for the available fossils can be found in the museum which helps with the decreasing possibilities in the museum.

Especially the tiles with the 6 graphics on dinosaur fossils as well as the museum maps bring the theme well into the game. The figures are from the edition runner, the second game author competition of the edition Bohrtürme.