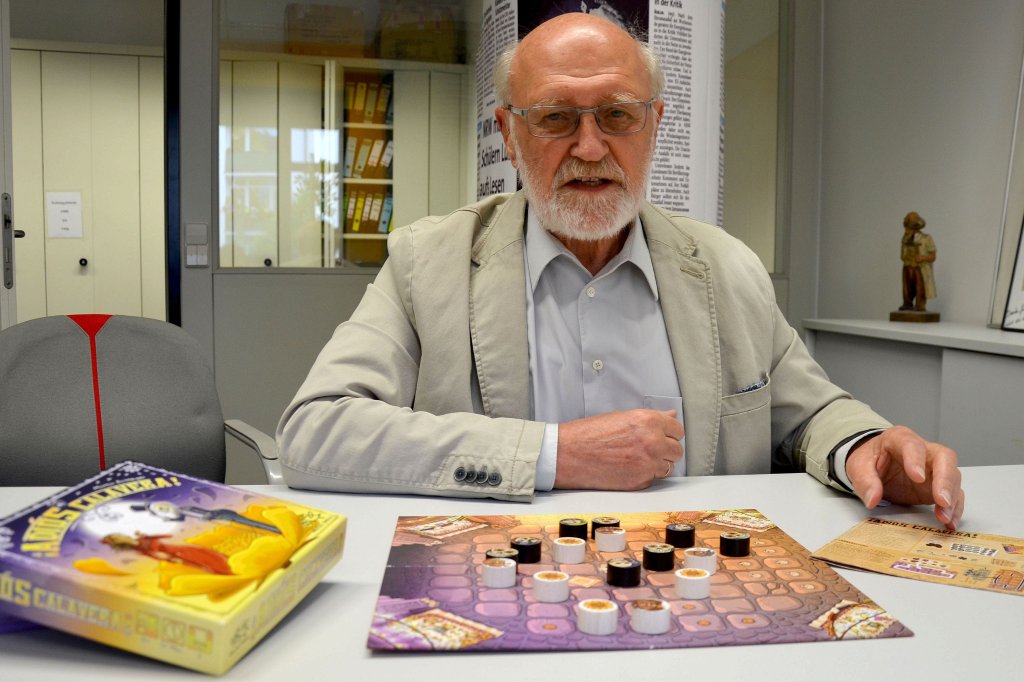 Channing Jones, an American who has lived in Germany since childhood, is himself a game author and has published “Babylon Tower Builders” at Mücke Spiele this year. He interviewed Martin Schlegel on “Adios Calavera!” on his approach to developing games. Some interesting facts come to light and many insights behind the scenes of game inventing.

Channing Jones (CJ): For how many years have you been developing games?

Martin Schlegel (MS): I started sometime by slightly changed existing games – e.g. from a game for 4 people to one for 5 – then more and more. Later on, I developed an entirely new one.

CJ: Could you go more into details?

MS: Exactly. It was, is and remains a beautiful hobby. Until a publisher produced a prototype of mine as a game, that lasted until 1996.

CJ: A long apprenticeship, one might say. Your first game in a publishing house was “With Moses through the Desert!”.

MS: Yes, my wife and I did it together. I’m not so strong on theme and it was about the story of Moses. So my wife took over the theme page. By the way, the game is still running today.

CJ: What do you usually do when you develop a game?

MS: There are 2 large groups within the game authors. One I call the storytellers. They begin with a theme, shape it as precisely as possible, which takes a while, and then the actual game comes to it. The story remains a key element. The other group I call the mechanics. They start with the game mechanism, work with an often horribly abstract plan and match the individual elements piece by piece. There, pawns are beings moved without knowing whether these will later become persons, ships or anything else.

CJ: You belong to the mechanics?

MS: Yes, but in two of my games, the theme was already there at the beginning. But this was a big exception. My other well over 40 games I did as usual. First the mechanics, then the theme.

CJ: Und what about the authors that begin with the materials, like me?

MS: Those are only a small group.

CJ: When do you add the theme now?

MS: Once the basic gameplay is fixed and thus a series of central elements, I turn my attention to the theme. I think for a while what might match the game. Often, I can use many of the testers’ comments. Normally the game is then also adapted to the theme.

CJ: A long way. How was it with “Adios Calavera!”?

MS: The same. Even though “Adios Calavera!” has only a few rules, I worked on that a long time. To begin with, there were a lot more rules. I then reduced them in many iterations, as an author, you only separate yourself reluctantly from own ideas. The plan has also continually changed. It was bigger originally and at times had a completely different form. The same happened with the figures. First I worked without any special abilities. Then they came step by step into the prototypes. Many test rounds were necessary to figure out what 8 special abilities the characters should have.

MS: Yes, clearly. Even the best ideas have to be intensively tested. Especially with the special abilities at “Adios Calavera!” We tried a lot. The testers enjoyed it.

CJ: When all this was accomplished, the present board arose?

MS: When the game was accepted by Mücke Spiele, the theme still changed.

CJ: We already reported on this.

MS: After that the graphical work was starts. But that is not for me. The graphical artist, who sees a prototype from me, sees that I have not taken any work from him. My drawings are simply amateurish, not usable. But Christian Opperer was a great graphical artist. He not only works quietly in his room, but also lets the author participate. I was able to get feedback from testers during his work and we do have a different view of boards than a graphical artist.

CJ: Thanks. I wish “Adios Calavera!” all the best.