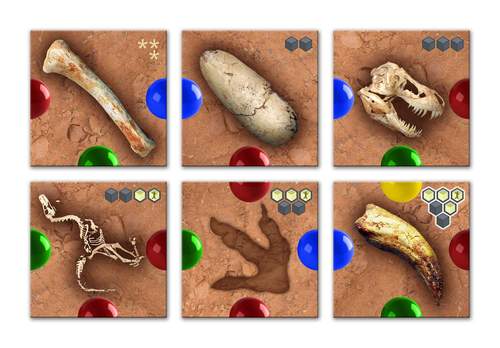 Exposaurus is the winning title of the second game author competition, which we conducted at www.spielmaterial.de. The game is therefore based on the two components that were defined for the competition of edition runners.

It is the figure assortment from the game “Candamir” and 36 glass stones in three different colors.
The author, Ron van Dalen, submitted a prototype that was already largely in line with the final result. This is simply because Ron himself is an illustrator, i.e. Exposaurus is really his development – game idea and graphics.
In collaboration with Ron, we developed a small expansion, which we offered at the Essen fair 2011. Apart from this, the focus of development work was on material optimization and clarity of rules. For reasons of cost, e.g. the camps on which the player had collected his researchers were not included.

The design submitted to the contest was already very similar to the game concept. Quickly, it was clear that this game would require little processing to be implemented. Nevertheless – as usual – the material and the rule details were worked out. Some terms have also been changed.