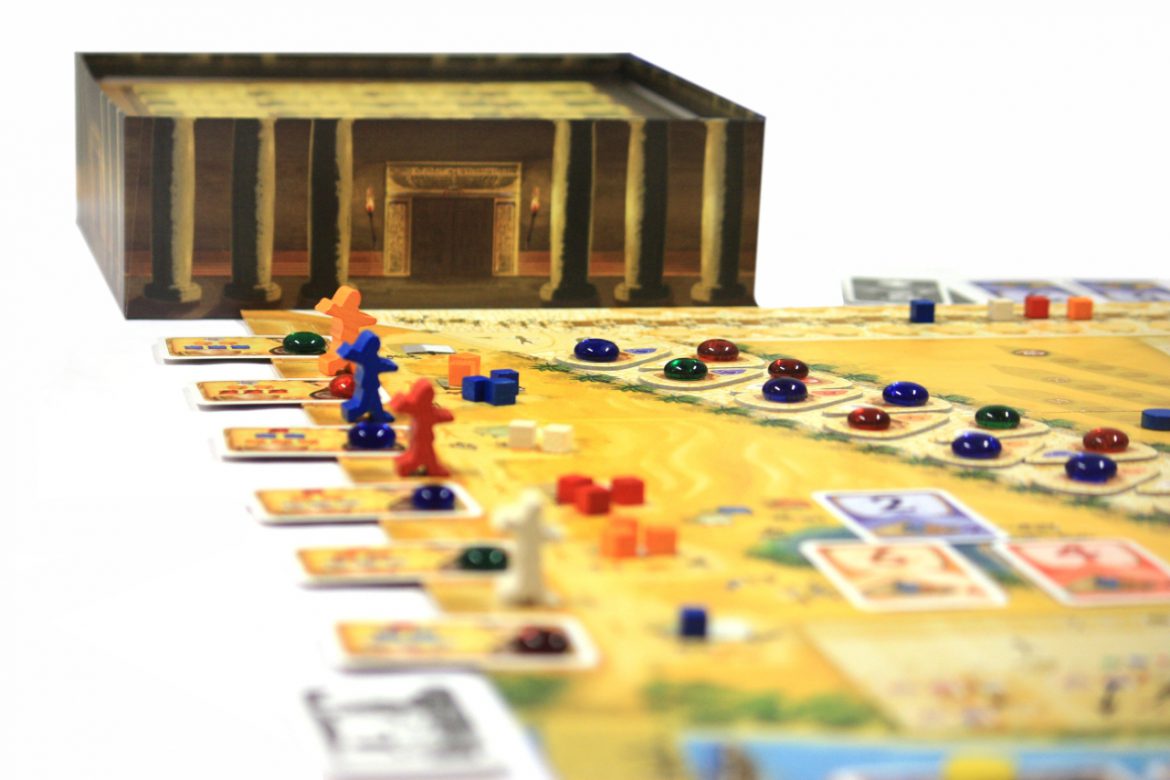 Here are a few notes to the game mechanics at Dahshur:

The game with its complexity mainly is targeted at the frequent player. Although the rules are not overly complex, players are very challenged by the strongly interwoven action and storylines.

The players are forced from the beginning to make decisions under pressure and see its effects sometimes quite quickly, but in some cases only at the end of the game. In addition, it can be seen in the course of the game that their own choices are reduced by the played prince cards. Since there are different paths to score points, this also raises the question for the players of whether one has adoped the “right” course of play.

The game time is around 90 minutes in a 4-player game.

Since the players need to start making decisions right away but are directly affected by decisions of the other players (by the choice of prince cards that determine the own action possibilities), they are very quickly caught up in the game. During the game itself little by little the success of the player’s strategies reveal themselves (what should focus upon?), but real clarity cannot be achieved, whereby uncertainty persists as an emotional point.

The attraction of Dahshur lives from the complex entanglement of different storylines. Players must allow the other players actions to get rewards themselves. The prince cards by which this is controlled, are at the same time also crucial for the placement of the grave goods end of the game. A second method to come to points, is the construction of the boulevard – an alternative storyline, that the players also must not lose sight of.

The random aspect is limited to the determination of rewards in the case of a tie. If you do not like that, you can change that with the expansion “Der Felukenhändler” that nullifies exactly this – but makes the game even more complex.

Dahschur has an attractive appearance. The box designed as a pyramid is put next to the board and the reveals grave chamber when opened, which is used for the final results. The two-dimensional game then gets a three-dimensional appearance. The wooden figures and shiny glass stones are visually and sensually attractive.