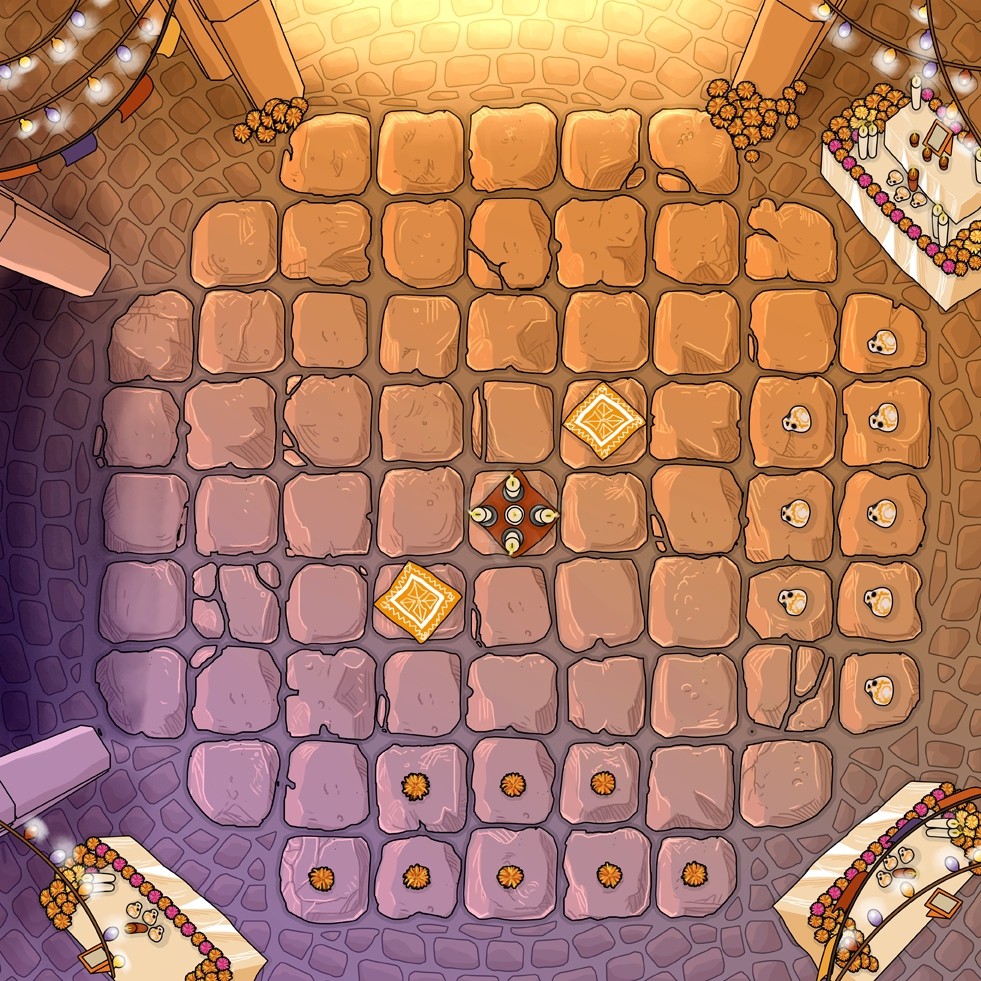 “Adios Calavera!” is the name of a game that will be released in autumn by Mücke Spiele. Martin Schlegel developed it. After Atacama and Takamatsu it is his third work at Mücke Spiele. Originally, the author provided a different theme and title. It was called Zócalo because it all took place on the huge square in the center of Mexico City, which is called Zócalo. Girls would form the one team, boys the other team, each headed by a player. Both groups stroll across the square and strive towards the opposite side. There are friendly, but also less friendly encounters with the opposite sex.

While the game itself was well received, the theme was not convincing. So we looked for another one with Mexico as the place of action. The game play was also to be stay the same, because it was fully developed and gave both players 30 exciting and exciting minutes of fun.

The experienced graphical artist Christian Opperer suggested using the “Dia de los Muertos”, an annual celebration in Mexico. The first reaction to the idea to incorporate a memorial day for the dead into a game was horror and shock. A gloomy theme with dead skulls? This is not suitable for a game. However, as usual, whenever you learn more about a subject it changes your opinion. The day of the dead in Mexico is not a mourning event, but a colorful folk festival in honor of the dead.

According to the old folk belief, the souls of the deceased return to their families in early November. Everywhere the memory of them is in the foreground. The streets are decorated with flowers, symbols of death and transience. Pastry shops produce the Calaveras de Dulce, skulls of sugar, chocolate or marzipan. The Pan de Muerto, the dead bread, is another popular treat during these days. And on parades, calaveras, these oversized skeletons made of paper mache, are carried through the streets.

After the souls of the deceased have been received in the homes on the night of November 2, the farewell to them takes place in the cemeteries. There food that is brought along is eaten, there is drinking, music and dancing. At midnight the time has come to say good-bye. The festival is over until the dead return next year.

At this point, “Adios Calavera!” sets in: Living and deceased take leave, separate for a year. You want to quickly reach the other side, but also prevent others from leaving the farewell meeting first. This is ensured by the living people. The dancer Maria-Elena, as well as Diego, the magnet, and the nimble Ximena. On the other hand, Jesus, Fidel and Evita have their special tasks and help the deceased.