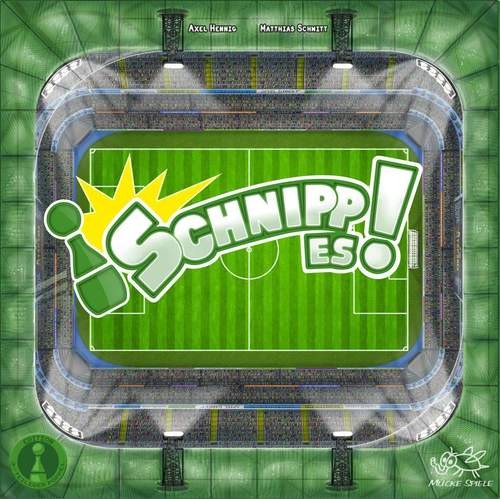 Here you will find all the contributions, reviews, videos and information about Schnipp Es! published by external sites, magazines and newspapers.

The magazine Himmelblau has released some information about Schnipp Es!:

The game site www.deskovehry.com from the Czech Republic has published a review of the game.

The game website Vin d’ jeu from France has published a review of the game.

The local television for the city of Mönchengladbach has published an article on the game “Schnipp Es!”.

“THEME – How could the match have turned out differently?” It does not need word-spins, and a soccer match wants to see some action. ”

ACTION – The lid of the box is taken off and placed vertically. This is the column for the stadium display. Place the emptied box bottom on top of this and mark the display along the edge with “0:0”. Today were are playing on sand! The game board is turned to green, the goals are placed on the base lines, the yellow/red cards are placed on the edge of the playing field and the ball is positioned on the kick-off point.
Are the teams ready? Are they wearing the right jerseys? The figures are three-part pawns – which are put together in the desired colors or purchased directly in booster packs as a national team. The teams (three against three) appear. The game begins. The alternating move of the other players is simple – roll the dice (6-sided) and use the fingers to snap the number of figures of the resulting number. But here skill is required. If a figure falls over, the move ends. If there is even an opponent’s figure among them, then there are yellow or even red cards – including expulsion from the game. And by the way – it is an advantage to sink the ball into the opponent’s goal.

CONCLUSION – It works – you may not believe it – the flipping, passing and even the goal shooting. The mood is also right. The finely dosed fingertip feeling provides for easy excitement. The game environment invites you to quickly comment on the events. And even the “Goooal”, exploding from the throat, automatically happens appropriately.