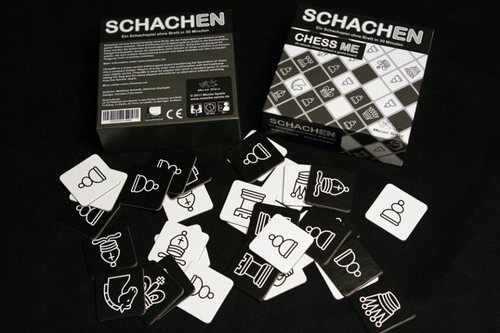 Here you can find all posts, reviews, videos and information about Schachen published by external sites, magazines and newspapers.

WOW – “Schachen” was selected as a prize for this year’s competition Kangaroo of Mathematics!

Kangaroo of Mathematics is a mathematical multiple-choice competition for over 6 million participants in more than 50 countries, which takes place simultaneously in all participating countries once a year and is written under supervision as a voluntary written competition. The aim is to support the mathematical education in schools and the creation of joy in the employment with the mathematics. In Germany, 850,000 pupils from primary and secondary schools are already taking part – for the 20th time in 2014.

The Niersradio reported in “Blickpunkt MG” on the 7th of December 2011 about the new games of the publisher Mücke Spiele; This is the report on the game “Schachen”

The online game magazine “deskovehry.com” reported in detail about the game Schachen (in English).

The game magazine “WIN” reports in the latest issue about the game Schachen.

In view of the almost unbelievable abundance of chess variants, it is not easy to find a new memorable title, which also creates the desired relation to the chess game. You may excuse the two authors for in their need having turned a powerful noun into a rather weakly sounding verb. Especially as it soon becomes clear what is the point, namely laughing heartily, when chess figures without board do crazy things. Strictly speaking, it is not even possible to speak of figures. Because these are reduced to illustrations on square cards, which whisk as images through the game.

At the beginning stand or more precisely lie, only the two kings, each with four peasants, as guardians at a reasonable distance from three virtual rows. Queen, officers and other peasants can only enter in the course of the game. All of them follow largely their familiar step patterns, but they always have to keep contact with their own or opposing figure, unless they capture one. Special rules exist for the king and the panws. The initial double step is denied. For this, they may already be transformed into a captured figure when they advance into the row of the opposing king. A king may, on the other hand, always pull forward or to the side and when capturing also retreat. Castling does not come into consideration at all.

After each turn, a piece can be put into play. These, however, can only be selected from three cards, which are drawn from initially shuffled decks. A pawn is placed on a free spot to the right or left of one of his fellow pieces, the queen and the officers behind him. A pawn conversion is not possible at the time of placement.

If the pawns often play a crucial role in orthodox chess, they are absolutely indispensable here as recruiters. An otherwise so attractive exchange with an officer of the opponent can therefore forbid itself, which the opponents naturally vice versa knows how to make use of with a cheeky advance. At the same time, the long-stepped runners are relativized in terms of their value by the continuous contact with figures, which is lifted only when capturing. Under these guidelines, the discovering the possibilities of a virtual board is an equally unusual and attractive task. This is not disturbing – since the game is easily manageable and can therefore be included in the calculation – the random element, which is probably included in the interest of casual play and avoiding standardized openings, is not disturbing.

The barely manageable abundance of chess variants as mentioned earlier brings with it, in addition to the more secondary problems with the title selection, that some at first glance so original appearing idea must still be denied this attribute. Jason Wittman and his TILE CHESS (Steve Jackson Games) have already taken the bold step in 1999, beyond an atomization of the chessboard, which had been conducted by Roland Siegers with SCHACH PLUS and Peter Vielor with CHOISS a few years earlier, to meld pieces and squares into one unit. For more information, see FP 67.

There are, however, serious differences in detail. In particular, all piece tiles in TILE CHESS must be laid out before the moves begin. In addition, there is an unrestricted swarm range, which can create almost bizarre positions and make it necessary to cross square with pieces of your own color.

There is therefore nothing wrong with the conceptual independence of SCHACHEN. After all, its limited randomness gives the event a cheerful note and thus creates a pleasantly relaxed atmosphere. However, if you feel this as too unpleasant, you do not need to be prevented from agreeing to have immediate access to the entire tile deck.