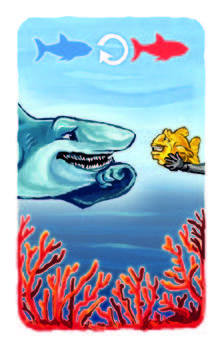 Sharks always swim in a clockwise direction. Divers swim clockwise and counterclockwise (not diagonally). The action of the played card must be executed. The actions of the cards are executed before a possible shark attack is triggered.

Your own diver swims to an adjacent square (not diagonally). The other diver is moved to the starting position of the active diver.

Any shark exchanges with an adjacent shark

You have to turn over any shark.

Each shark floats one place clockwise.

If you play the card camouflage, the diver is immune to shark attacks until the beginning of his next turn. The diver card will be removed from the display until the player’s next turn. If more than one place should be free when reinserting (multiple concurrent disguises), the player may freely choose the place of insertion.

Can be lay to any row.