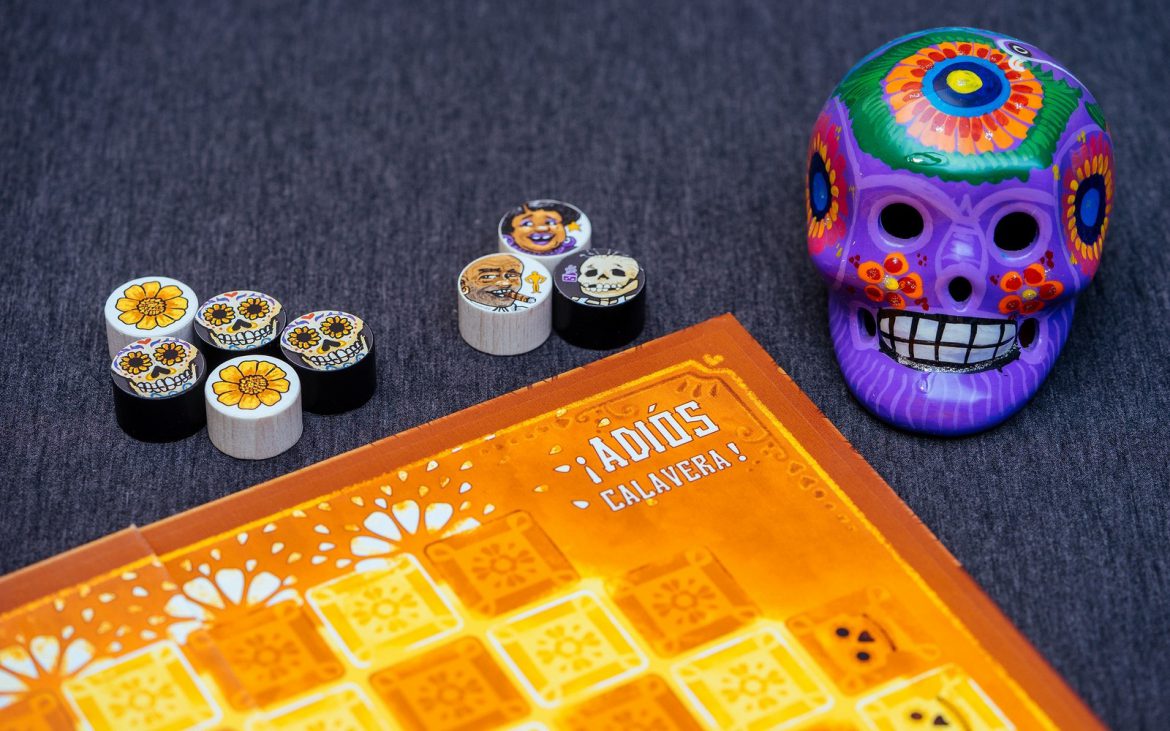 Game author Channing Jones once again interviewed Martin Schlegel, whose game “Adios Calavera!” has just appeared with Mücke Spiele. Now it’s about the game itself, about the individual pieces and their abilities …

Channing Jones (CJ): After talking about the development of games, we are now looking into the actual game. After all, the rule book contains 16 pages.

Martin Schlegel (MS): This does not have to be intimidating because the pages are small. Also note that he rules are available in 4 languages. Only 4 small pages per language.

CJ: And there is plenty of room with all the variants from beginners to decision-makers, so there is something for everyone. In addition, there is information about the Dia de los Muertos.

MS: The rule itself is quite short. It is like your exciting “Babylon Tower Builders“. This is also explained quickly, but then thinking is required. Will there be any of these games in Essen?

CJ: We will have a few copies there. But back to “Adios Calvera!”. How does the game work? Can you explain it in a few words?

MS: Two players, whose 8 pieces proceed at a right angle to the other team, want to quickly reach the other side. The maximum amount of you can move corresponds to the number of pieces which are at a right angle to your main direction of travel. But obstacles stand in the way. One of these is the center of the board. And then you have all the other pieces, which you cannot skip. You have to run around them. In addition, 4 of the 8 pieces have special abilities.

MS: Yes, they are already require many decisions even before the first move. I first pick a side: either living or deceased. Each piece has its own special ability, the living being the same as the deceased. But before the game starts I have to decide: For which 4 pieces will I take the special ability and for which will I leave it with the normal ability.

CJ: I think the individual preferences play a role in the selection. One might play aggressively, the other more restrained. What are 8 special abilities now?

MS: There are leaders everywhere, so also here. He can partly transfer the power he has, that is, his movement points, to another piece. The strong one is also powerful. He manages to push another piece away before him. The magnet acts quite differently. He can attract other pieces. I would not want to forget the unclean: his own team can hold it out beside him. Those from the other team avoid his proximity.

CJ: These are the 4 men. What characterizes the women?

MS: They move differently. Pieces are an obstacle, you have to walk around them. But not the dancer, she’s elegant. Also the diva has a good solution in the crowd. She moves diagonally, which saves energy and allows her to help out in the front or the rear. The quick one solves the problem in different way. She can go 2 spaces more, thus has 2 more movement points. The exuberant one is different: she can force the neighboring piece to exchange positions with her.

CJ: Some pieces help yourself, the others can disrupt the other team. This makes it difficult even for me to choose.

MS: No problem, because in the variant “for complexity freaks” all 8 pieces have their special abilities.

CJ: If you choose a team, which do you choose, the living or the dead?

MS: So far, I leave the choice to the other player. They usually like to choose the dead, because then they have Evita, Fidel and Jesus in the team. In games at the stand of Mücke Spiele in Essen (stand no. 3-K104) I will also do it like this: The other player gets to choose.