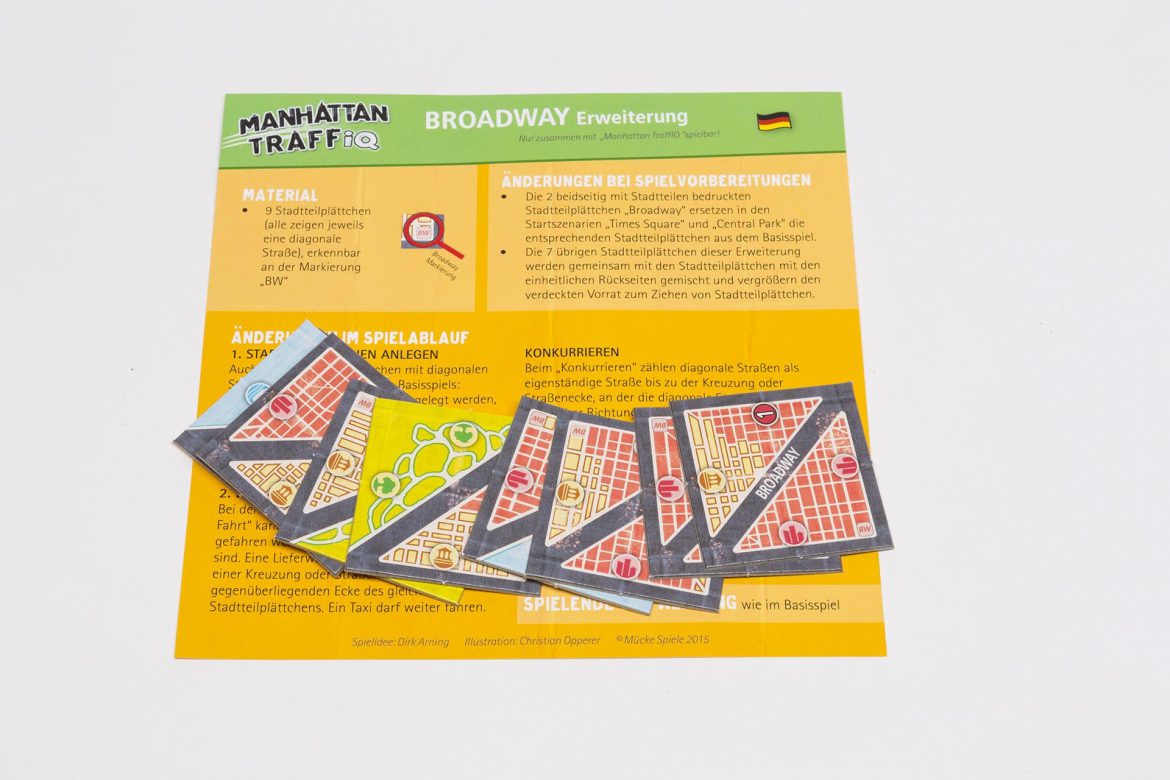 The main purpose of the startup scenarios is to eliminate a starting player disadvantage. This results from the fact that a car may be used only when a square of four district tiles is completed. In the starting scenario “Times Square”, it is statistically insignificant whether three or four other players follow the starting player. With the larger launch scenario “Central Park” with the two long roads on the long sides of the park, it is more important to offer even the “late” players opportunities to moor. It is therefore increased in the game to fifth. Extension “Empire State Building”.

Can the Empire State Building be relocated during the game under certain circumstances?

No. The Empire State Building once placed remains until the end of the game where it was placed.

Do the vehicles on the corners of a city tile with the Empire State Building already count double points during the game?

No. Vehicles on the corners of a city tile with the Empire State Building are not stronger during the game than on other intersections / road corners. Only at the end of the game are vehicles there given double points for scoring.

Can the Empire State Building also be placed on city tiles from expansions, for example ones with diagonal roads from the Broadway Extension?

Yes. The “Empire State Building” piece can be placed on any city tile with red areas / at least one round red “skyscraper” icon and no attractions. Diagonal roads on the tiles of the Broadway expansion are not blocked thereby.

Can vehicles on diagonal roads also be removed?

Yes. When a vehicle is placed on an intersection / road corner, are which there are also one or more diagonal roads, or it is driven there, then diagonal roads are also considered if the active player has more points than other players with vehicles on this road.

Can you place city tiles with a ferry line next to tiles with water but without ferry?

Yes. It is impossible to extend a ferry line as long as there are no tiles with a ferry line. Therefore, the first ferry tile must be placed with its other side. In order to create an incentive to be the first to place a tile with ferry, you get the privilege to draw an additional city tile.

Do you have to place a ferry tile so that you extend a ferry line?

No. Each city tile of the “East River” extension can be placed next to other tiles using other sides than the ferry and then works like any other tile. However, the player then gets no additional city tile, unless it was the first tile with a ferry (see above).

Can there be several ferry lines?

Yes. Whenever ferry tiles are placed with their other sides, they create new “connection points” for ferry lines.

Can you draw two additional city tiles when you attach two ferry tiles?

Yes. Every time you extend a ferry line by a tile it allows you to draw an additional tile. If you use both actions for matching a tile with the “ferry” side, you can therefore draw two city tiles.

Can you draw two additional city tiles, when you connect two ferry lines with a single ferry tile?

No. If you place a ferry tile, you are only allowed to draw one additional city tile, even if you made one ferry line out of two.

How do you handle the privilege of “drawing another city tile”?

Whoever places a tile “East River” so that he gets the privilege of drawing another city tile, should draw it immediately and place it face down in front of him until the end of his turn. This is because (as with another other additionally drawn tile) this tile may not be placed in the same turn.