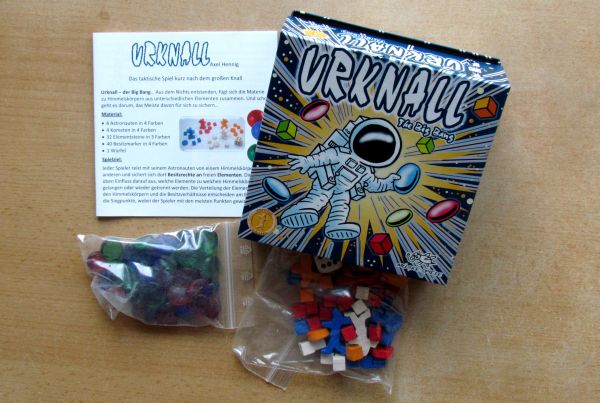 Here you will find all posts, reviews, videos and information about Urknall published by external sites, magazines and newspapers.

The Niersradio reported in an episode of “Blickpunkt MG” on the 7th of December 2011 about the new games in the publishing house Mücke Spiele; the report on the games “Big Bang and Exposaurus” in the following

Review by Oberlarer Spieletreff
Episode 447: Urknall, Mücke Spiele
for 2-4 players, ages 8 and up

It does not always have to be big games that catch the eye at the fair in Essen and it is not always games from big publishers, and it is not always the game play leader himself, who encounters an interesting game of a publisher beyond the usual suspects. In this case, it was (once again) the 10-year-old son (mine), who noticed Big Bang and who bought it directly.

The Game: Urknall is the result of a game author competition (see www.spielmaterial.de), in which a game has to be developed out of a set of conditions. The publisher Mücke Spiele has set itself the task to publish game ideas, which arise within the framework of such competitions. A great idea by which not only young game authors get an opportunity to establish themself, but also for unusual game ideas that would otherwise have perished or never appeared because they do not correspond to the current mainstream. In this case, we players are astronauts who are moving from one heavenly body to the other in order to collect elements that have formed very differently in the size and composition shortly after the Big Bang. Sounds easy – right? Unfortunately, you never know what value the collected items will have before not all the ownership has been distributed. And to add to the excitement of the whole (in the beginning it was the chaos) the value of the elements change in the course of the game. How that? Well, we players are not just astronauts, no we are also still beneficiaries of a distant future technology. We can use the effects of gravitation to unite or divide the heavenly bodies in order to increase or decrease the value of the elements (ours of course ours) or reduce them (our fellow players of course too).

Game Components: A goal in the development of the game was related to the amount of the game material, which was very small and was met by the author of the game Axel Henning, which resulted in a special prize. Why do I emphasize this? Because the guideline was extremely minimalistic and yet (or because of that?) an extremely playful result arose (roughly the same as the Panda, the crazy car by Fiat from the 80s.) You got a car that offered just as much as you needed to get your from A to B, which nevertheless offered a great driving pleasure. This was the dawning dawn of a new car philosophy, no more and faster and more comfortable and still a treat and here, but just as much as you need and no more and the whole thing very cheap. OK, end of digression, the game includes exactly 4 astronauts in 4 colors, 4 comets in 4 colors, 36 elements in 3 colors, 40 owner markers in 4 colors and a die.

The Game Objective: has already been named in the introduction. We travel between the celestial bodies and trying to collect as much ownerhsip as possible of free elements of the respective celestial bodies or use our influence to change the distribution of the elements on the celestial bodies. Before the start of the game the players receive their astronauts, comets and asset markers. Players take the 36 elements into their hand and drop them from a low height onto the table (exactly, there is NO game board). This is our “Big Bang”. Then, the stones are arbitrarily arranged in predetermined groups, which form the 22 celestial bodies (CB). There are 4 CB with three elements, two of which are different, 6 CB with two elements and 12 CB with one element. Starting with the starting player, each player places one of his astronauts and an asset marker on each CB. A move consists of three actions: 1) roll the die, 2) travel, 3) change of CB. 1) Die: The die roll determines in action 3) which two CB are united or which are divided. 2) Travel: You move your astronaut to a CB, where both CB (the starting point of the trip and the destination point) must each have one element of the same color, and at least one element must still be free. At the destination CB, a free element is marked with an asset marker. If you can not travel, mark a free element of the current CB. If there is no asset marker remove one from the game. (Here it was not clear whether a player is removed from the pool of the player who is on the CB or one from the CB.) After a discussion about the procedure a) remove a player’s asset marker from the CB and if there is none from the player’s pool on the CB then b) remove a marker from the pool of the player). According to these guidelines, it is clear that the tactical approach must include the following considerations: a) Elements of the same type on target and starting CB b) Free element on target CB and c) The color combination of target CB determines the future possible route(s). In 3) Change of the CB: you separate or unite depending on the die roll CB on which there is NO astronaut. In this case, the two smallest CBs are always combined and the sum of these elements is formed. If this sum is smaller than the rolled number, you have to combine two CB. The sum of the elements of both CB can not be greater than the die roll number. During the unification, the asset markers move along with it. If the rolled number is less than three AND less than the number of elements of the smallest element, then a CB on which there is no astronaut is divided. One of the two newly formed CB must contain as many elements as the rolled number. The nature of the elements thus separated is arbitrary. We have concluded that the restriction of the composition of the elements of the CB, as stated for the game preparation, no longer applies in case of union/separation. This is not explicitly so in the rulebook. So far so good, but what are the comets for? Well, they have among other things a function like in real life: a) They force an unification of CB, even if there are still astronautsthere. And any CB can be united as long as the number of elements does not exceed the rolled number. Or b) You leave your astronauts at the CB and place another asset marker. Or c) the restriction on start and destination CB that they must contain at least one element of the same color is canceled. Or d) you do not use the comet and get an additional victory point at the end of the game. In cases a-c, the comet goes out of the game without substitute.

Game End: If all the asset markers are being used (better: there are no asset markers left in the pool of the players) the game ends. The astronauts now serve as a point marker on the scoreboard (back of the rulebook). The CB are evaluated individually. A single CB gets 0 victory points, even if there is an asset marker there. On the other CB, the number of element colors present there are evaluated. If there is only 1 element from an element color, this element counts as much as there are different colored elements on the CB, if there are exactly 2 elements then each (!) asset marker on the CB is worth two points, if there are more than two elements then only the player with a majority of asset markers in an element color on this CB gets victory Points, namely as much as there are elements of that color on the CB. Any comets still present bring a victory point. The player with the most points wins.

Evaluation: I find it always astonishing with what small amount of components you can get very good games. Besides the play being fun, Urknall offers a wide range of possibilities tactically and strategically. The rules are quickly understood, the small weaknesses are usually forgiven quickly. The game plays quickly and without great breaks. A game that we liked very much and we would like to recommend.