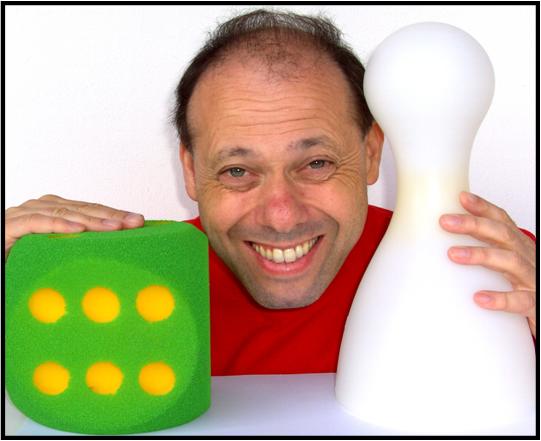 I am a true Oberpfälzer – born 1961 in Cham / Upper Palatinate, the gateway to the Bavarian Forest. I live in the city “at the Rainbow” after the motto: … ONLY PLAYING IS NICER …
As a trained wholesale and foreign trade merchant, industrial merchant and with a degree in business administration I work at the Mittelbayerische newspaper as a sales inspector. Therein lies my interest in strategic trade and construction games. Even as a child I created my own game boards wrote rules. Inventing games is therefore an old passion, to which I have devoted myself more intensively in recent years.

The visit of games fairs and the discovering and testing of interesting innovations are truly welcome islands of peace in the busy everyday life. It always fascinates me to unbox and setup new games, as well as to read the rules of the game and to learn to know new paths of thought that lead to success in the game. That’s why I enjoy my free time very often at games evenings with my wife and friends.
I am particularly pleased that one of my ideas won the author competition at www.spielmaterial.de and thus gets the chance to be published.

Pauli Haimerl, author of the game, telling a little about the history of the game:

“It’s the final version of years of development work, in which the game went through different themes and different action mechanisms.

The core of the game from the beginning was the prince gift. The idea that players must give the active player cards and thus action potential to ultimately benefit themselves from it, has always been the center of the game. Equally important was the element, not only to score points for oneself by placing precious stones, but to also give points to other players.

The author contest presented an interesting challenge, namely to match the existing game to the specified materials. Basically, the wooden and gemstone elements fit very well with the previous version. However, it was made for four gemstone colors (per player 1 color). Now there were only three colors available.

Through this reduction the entire game has to be re-designed. Thus, the new areas market, avenue and procession emerged with their interactions. The need to issue cards in the added grave chambers, to be finally filled with gold and silver, keeps the suspense until the very end.”