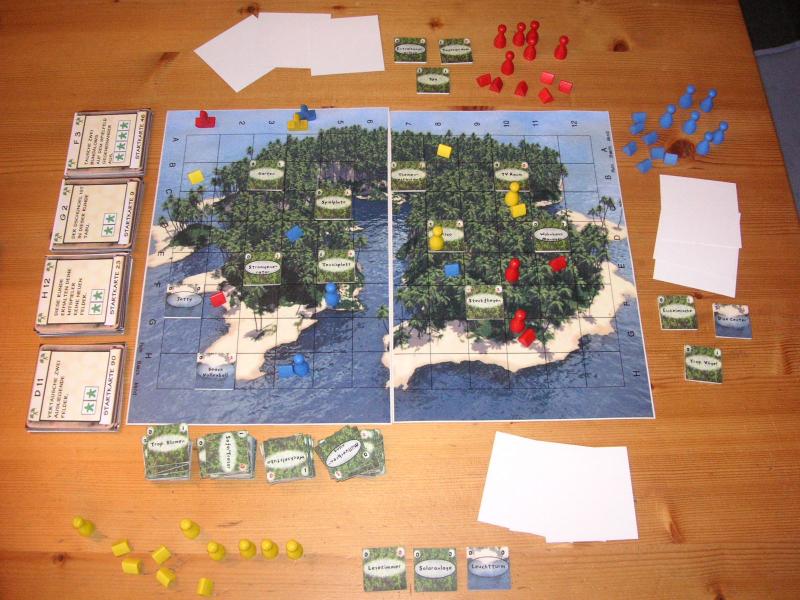 Palm Beach Island Resort is a tactical game for 2-4 players, ages 10 and up. By placing fields with the infrastructures needed on the island, a tourist island, which is visited by guests from all over the world, is created during the course of the game.
The goal of the game is to build bungalows and encourage the tourists to spend money, i.e. ultimately generate sales. Each player acts as a tour operator, who tries to fill his bungalows.

Welcome to Palm Beach. The local government has released one of the atoll tropical islands for tourist development: Palm Beach Island. Already the tour operators are ready to lure the first tourists to this unique retreat.

Each player receives the materials for a tour operator:

The game goes over several rounds, each of which consist of the following steps:

1. Choose an Action Card
Each player chooses one of his action cards and places it in front of himself, before all of players turn around their chosen ones At the bottom of the cards there is a number with which the turn order is determined. The player with the smallest number starts. Then the player with the next higher number etc.

2. Action
The active player now performs two different actions. He must first place a tile, then he can choose one of the possibilities listed below.

Possible action: Building a Bungalow
The active player can build a bungalow of his own color on the space indicated on his action card. It should be noted that – at least when it comes to their accommodation – tourists are looking for a quiet and restful place. The prerequisite for the construction of a bungalow is therefore that the resting factor of the site in its direct environment (not diagonally) is not negative. In this calculation, an adjacent, empty beach space is worth 1 plus point!

possible action: Move Tourists
Since the island at the beginning of the game offers only little, few tourists come. But the more infrastructure is built, the more they will visit the island. The number of tourists depends on the number of built bungalows. The player can move a tourist of his own color by the maximum number of spaces as indicated on his card. Fewer spaces is also possible. The movement is from space to space, but not diagonally.
Once tourists have reached the island, they are looking for entertainment. During scoring a player receives the turnover value of the attractions, on which his tourists are, as victory points. The player moves his ship by that number.

possible action: Exchange Tiles or Cards
The player can discard all his tiles or all his action cards and draw the same number of tiles or action cards from the deck.

End of Round
Once all players have completed their turn, the round ends. Before the next round begins, you check whether all of the bungalows have a non-negative resting factor. If a bungalow fails to fulfill this requirement, the bungalow must be demolished and handed over to the owner.

Scoring and Events
Scoring is done at the end of each round of the game, as well as by action cards. The latter differ in their respective conditions, which are explained on the action cards.