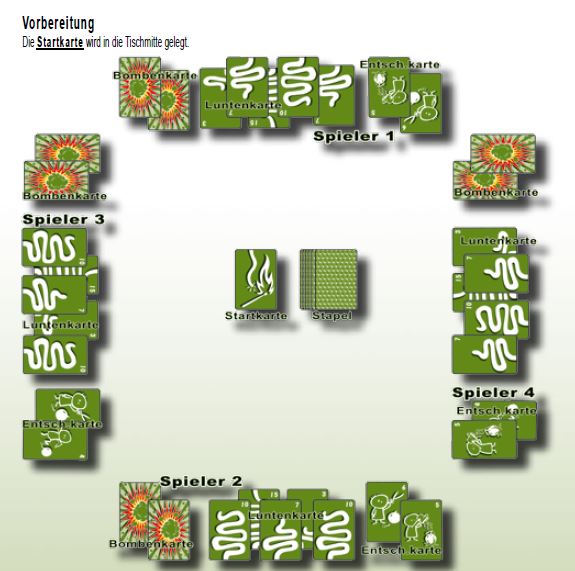 The last person to have lit a match goes first.

The starting player plays a fuse card from his hand onto the fuse on the match card; then the player to the left quickly (as Fuse is a fast game) adds another card, and so on, each player playing in succession. Cards must be placed so that the fuse end at the bottom of the card being played overlaps the end of the fuse on the previous fuse card played (see Illustration).

Since the point values are determined by the length of the fuse on each card, it is not necessary to position a card in such a way that the value on the previous card remains visible. Each player draws a card from the deck immediately after he plays a fuse card. Each player has always 7 cards on his hand. In case a player after playing a card has forgotten to fill his hand again, he can do so anytime. At the end of the game, each player must have 7 cards on his hand or refill in that moment.

Play continues until a player plays a bomb card or a defuse card, or until the game-ending time bomb is drawn.

When the players use  one of your bomb cards, they throw it on top of the last fuse card; play is immediately suspended. The player takes all the fuse cards (not the match card) as well as any defuse cards lying next to the match card (see “Defuse Cards”). The cards received stay in front of the player for later scoring, turning the bomb card face down on top of the pile. Players should always be able to see how many bombs are left. When you play a bomb card, you do not draw another card. Then the ext player (to your left) begins a new round by placing a fuse card on the match card.

End of the Game and Scoring