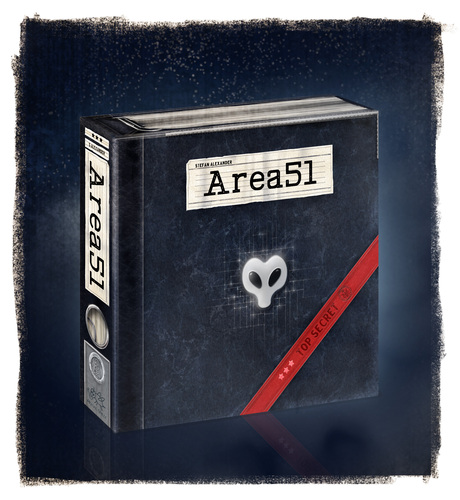 All informations about Area 51

Informations about Area 51 at Boardgamegeek

Welcome to 1950s USA — the era of huge cars, rock ‘n’ roll, and alien activity! To prevent a mass panic, the President has ordered his generals to store all evidence of the existence of aliens.

In Area 51, a secret military base in the Nevada desert, players store all the futuristic weapons, unbelievable tools, and alien corpses in high-end storage facilities. However, this base is capable of hiding only certain artifacts and must be improved all the time. The generals try to outperform each other in building and upgrading the facilities and the infrastructure in addition to finding the optimal logistics for storing the artifacts to please the President.

In Area 51: Top Secret, players encounter several categories of artifacts — ships, weapons, tools, etc. — which are numbered 1-4 to show how dangerous they are (and therefore what security level is needed to store them).

Area 51 is a card-driven strategy game in which the goal is to safely store alien artefacts. The players are constantly faced with the dilemma of occupying scarce building space for the so-called habitats, while at the same time expanding these habitats in order to ultimately have suitable storage areas.

Area51 impresses with its unusual scoring mechanics. In the card-controlled strategy game, in which the aim is to safely store extraterrestrial artefacts, the players are caught in the constant dilemma of scarce storage space and the fact that their own actions inevitably also award points to the other players.

The graphic design is also an “eye-catcher”. The box is designed as a file folder, the game board a triangle with rounded corners, which is assembled from several pieces. The theme is dedicated to the secret military base in Nevada.