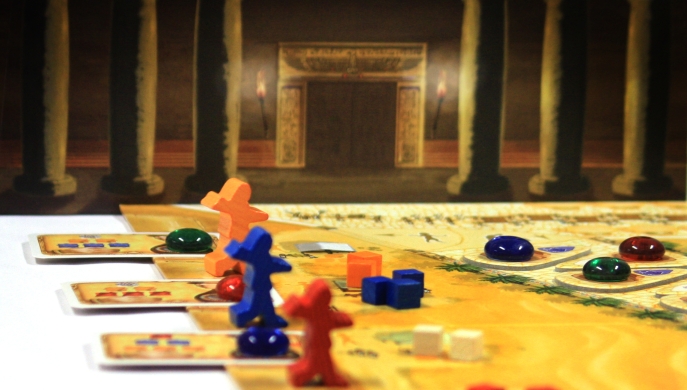 The uncertainty of hidden gold and silver discs was criticized by some players. The player had a two value 6 coins and was only to place one himself. Since no other had a vale 6 coin, the second one could not be placed as well.

To this end, the following explanation and possible solutions:

In principle, it does not fit to the nature of the procession to place the collected gold/silver coins on other (lower) prince cards in the grave chamber. Players standing behind in the procession would lose any opportunity of making points.

It should be noted also that a player who can place his 6 value gold coin in the grave chamber at least gets 6 RP (recognition points), while the other players probably had “less good” gold coins and thus got fewer points.

Nevertheless, you can use one of the following 3 variants to defuse this:

1. Variant:
For anyone who does not like playing with hidden coins, play with them open instead. This naturally results in increased competition for the supposedly better coins.

2. Variant:
When playing an action card for the procession area, the player does not only move forward in the procession. The player is also allowed to secretely look at the gold and silver coin 1 city card. Then coins are then placed back face down on the city card. So you can deliberately seek to get the value of a city card, or not, if that appears uninteresting to the player.

3. Variant:
Should a player have already placed 1 gold or silver coin have another 1 coin (or even more) coins with exactly the same value, but cannot use them, then the in this case the player gets 2 RP (gold coin) or 1 RP ( silver coin) per no longer placeable coin.